We are all Lesvians: Love, Strength and Good Energies in Paradise / Refugee Support Campaign 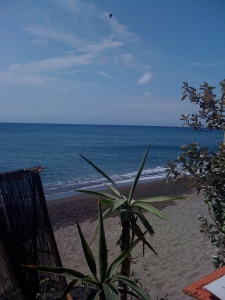 So…here I am, in paradise on earth: the village of Skala Eresos on Lesvos Island, Greece. Birthplace of Sappho, the lyrical poet who lived around the year 600 BC and whose works were so lovely that the Greek philosopher Plato later referred to her as the Tenth Muse. And because many of her poems focused on women as the subjects of her love and gaze, the term Lesbian (which already refers to all residents of the island here–even the men! 🙂 ) became to hold the popular meaning it does today.

For the past week or so, my daily routine has gone something like this: Wake up around 9 or 10 and head out for breakfast at one of the countless cafes overlooking the beach—each one seemingly more gorgeous than the next. Next on the agenda: a few hours of the freelance translation work that I brought along with me, and then around 1 or 2 PM, head to the beach for some sunning and swimming (au naturel!) in the crystal clear waters while making friends with women from all around the world.  At 5 or 6PM, head back to the sweet little room I am renting for a shower and to do my daily clothes washing. Back out to the cafe for another round of work and dinner, and sometimes out to dance or drink with the ladies. I could definitely get used to this lifestyle!! In fact, many women do just that…end up settling down here permanently amongst the locals, running some sort of small business in the village.

That’s what’s so wonderful about Skala Eresos: everyone seems to coexist together so peacefully. Most lesbian festivals or retreats I have been to are completely separated from society at large, but this is one is smack in the middle of a functioning tourist town, interspersed amongst heterosexual couples and little kids and grannies and grandpas. And nobody seems to mind. In fact, at the opening gala a couple of nights ago for the artistic and cultural International Women’s Festival—a fantastic beach party featuring dancers and musicians and theatrical acts onstage—said older folks and little kids sat front and center to catch the action, never mind the occasional female couple kissing around them. And when my friend first brought me to the guest house where I am staying, the friendly older man who runs it inquired whether she and I were a couple. 🙂 Yes, granted, the village probably loves us for our gay tourist dollars (the “pink pound”, as they call it in Britain!), but if the result is mutual understanding and friendliness, then who really cares!

As the totally awesome DJ Promiss rocked it until well after 2 in the morning at the opening party, on the fantastical beach stage with the waning full moon as a backdrop, I could just feel positive energies being stirred up all around. It sort of reminded me of the good vibes of DJ Gerry and DJ Chiaki at Spring Love (I wonder how many times can I plug that event in my own blog?! 😉 ).

Truthfully, I had been trying to fight off feelings of dread for the past couple of days, after not hearing anything for three days from my girlfriend, who is spending the month walking along the Camino de Santiago in northern Spain. I have been trying to reprogram myself to move away from the Jewish worry gene (“Oh my gawd, she must be dead”) to something more constructive. So, as I sat there drinking in the loveliness of the evening yesterday, I began to create a mantra for myself: send her what she needs—not your worries, but love, strength and energy. And sure enough…midway through the evening I received a text message from her, and aside from her aching muscles, she was fine. The mantra also worked yesterday  afternoon as I was swimming out to a rock in the ocean, which I then climbed to the top of along with a couple of friendly women I encountered along the way. No more “too dangerous…better not try it,” thanks. Love, strength, and good energy all the way!

I also found myself trying to stir up energies of love and compassion for the folks sitting on the other side of Lesvos Island at the Pagani Detention Center for refugees. Being very close to Turkey, Lesvos Island is a first point of entry  for many people hoping to enter the European community–some of them refugees from Iraq and Afghanistan. They usually arrive in very poor quality boats, and are intimated by the Greek coast guard authorities to turn back into Turkish waters–the choppy waves from these tactics sometimes knocking the boats over and causing the refugees’ deaths. Those that do make it to land and are discovered by the authorities are sent to Pagani, which is unsanitary and overcrowded—UNHCR found 990 people on a recent visit when it is meant for only 280. They are being held in inhumane conditions, and some are now on a hunger and thirst strike.

The folks at the recently organized No Border Camp Lesvos 2009 have organized an e-mail campaign to get this facility closed down–please help out if you can.

A very good friend of mine, an Iraqi journalist and human rights activist whom I met in Japan and whom I e-mail with regularly, told me he dreams of the day he can come visit Europe and swim in the sea and laugh and enjoy life like any human being should be able to do. Because he holds an Iraqi passport, however, in this unfair world as it is presently systematically organized, he may not. As I head off now for my afternoon swim and to enjoy myself during the rest of my stay here, I will be continuing to send out vibes of love, respect and good energy for him and for every single person who is not able to enjoy these simple freedoms.